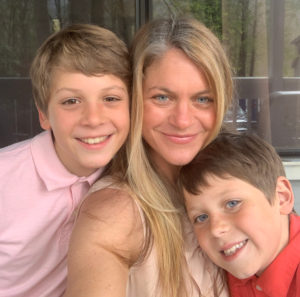 How can it be that my boys are already twelve and nine? When I created this blog, Case was only five months old and now he’s nine! Time really does fly at a bizarrely fast rate. Nothing brings me greater joy than being mom to my two boys. Brooks and Case are three years and one day apart. Every year around their birthdays, I write a post about their growth and accomplishments during the year. I’ve been doing this since they turned two and five. It’s a journal of sorts, one they can look back on when they’re older and remember a few things about their childhood. 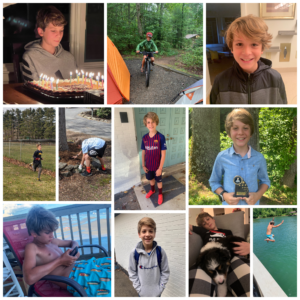 I feel like twelve sounds so much older than eleven. Only one more year before my little boy is a teenager. The growth Brooks has experienced this year has been mind boggling. I swear he’s grown at least five or six inches. We’ll find out for sure next week at his wellness visit.

Despite 2020 being a rough year in general, it’s been a big year of accomplishment for Brooks. Just before COVID hit hard, Brooks performed as Michael in our local theatre’s production of Mary Poppins. He practiced daily in January and February and the cast performed one weekend of shows before the theatre was shut down due to the pandemic.  The spring season of club soccer was canceled due to COVID as was Brooks’s fifth grade DC trip and an AIG trip to Space Camp. At the end of fifth grade, Brooks earned the Dale Parris award, which is an award given to a stellar student. Only one girl and one boy win, so we were all very proud of him! It was quite an honor.

In August, Brooks broke his arm while skateboarding. It was a bad break and required surgery. It was his first surgery and first time under anesthesia, so this mommy was pretty stressed out about it, but Brooks did great. He had to start sixth grade with a broken arm. Luckily, it healed before cross country season. Cross country was Brooks’s first school sport as a middle schooler. He loved it, and I especially appreciated the mentorship from the older runners and the coaches. He improved tremendously throughout the season even earning a spot on the all-conference team. In early September we went on a big camping trip with friends. It was the first time I’ve camped with the boys. Brooks also went on a big backpacking trip with his dad, stepmom and stepsister. He loves being outside and enjoying nature. Brooks really got into mountain biking this past year and worked more on snowboarding; however, during his first snowboarding trip of the season, he broke his wrist. Same arm as the first break! Sigh…

My sweet Brooks has always had an old soul and displayed a quiet disposition. He’s determined in all of his efforts and loves to learn, travel and explore. This year he got really into politics and followed the election closely. It was fun to watch. He’s my child who enjoys one-on-one dates to sushi or Indian restaurants or spending time in a bookstore. As of now, he wants to attend NC State when he grows up and major in architecture. 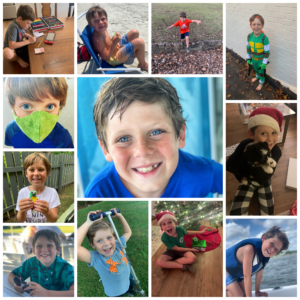 Case is adventurous in spirit and naturally creative. He loves, loves to draw, sculpt and create stuff out of anything he can find around the house. He was excited to start third grade because all of his best friends are in his class and even though COVID has made school much different this year, he’s still having a good time. His teachers always comment how friendly he is to everyone and how he’s willing to play with all of his classmates. It makes me proud to hear that.

In the spring when Case finished second grade, he earned the Mathematics award for his class. And at the start of his third grade year, he was voted by his classmates to serve on the student council. At home, he is always drawing and making books. He even created a series of cards similar to Pokemon cards. He named them Mon-Al cards because the characters are part monster and part alien. He’s also started sculpting with clay. It’s so fun to watch him get into his artistic zone. I have no doubt he’ll grow up and do something in the arts or graphic design world. On our big camping trip, Case started whittling wood, so after that trip, he got his first little pocket knife. In regard to athletics, Case didn’t get to play basketball this year due to COVID. Basketball is his favorite sport, so he was very bummed about not playing. He was able to play an abbreviated soccer season, but that wasn’t the same as basketball. We’re hopeful things will be back to normal when the next season rolls around.

During the shutdown, we enjoyed a lot of campfires and Case was always running around playing with sticks or pretending like a big stick was a sword or staff. If you’ve been reading this blog for a long time, you may remember all the years Case loved the Teenage Mutant Ninja Turtles. He went a few years on an TMNT hiatus but now it’s back in full force. He loves watching, learning about and drawing the Ninja Turtles. He also designed and made his own Michelangelo costume for Halloween.

Case has an exuberant personality and loves to play in the traditional sense. It’s refreshing to watch. As of now, he wants to attend an art school and be some type of illustrator. Even though he is nine-years old now, he will always be my baby. He’s  sensitive and intuitive and always knows when his mommy needs a hug. For that, I’m very grateful.

Over the summer, we all enjoyed a lot of swimming, lake time with family, a beach trip to Ocean Isle Beach and a trip to DC to see my sister, brother-in-law and nieces. While both boys have had big years individually, we’ve also had some big changes collectively. My boyfriend, Matthew, and I bought a house together and we’ve blended two families. It’s busy and fun and exciting and wild, and we are loving it. We also bought a new puppy. He was a Christmas gift for all the kiddos. His name is Ringo Mac and he’s the cutest Australian Shepherd in the world. This past year was stressful in a lot of ways, but watching my boys grow and change is always the highlight of my life. Happy birthday, Brooks and Case! 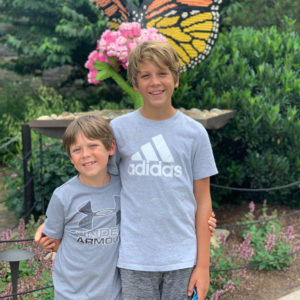