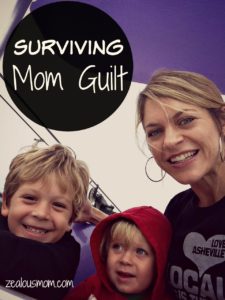 Mom guilt is a real thing. Before becoming a mom, I heard the term ‘mom guilt’ thrown around here and there and didn’t think a thing of it because it didn’t affect me directly. For the past five years, however, I’ve become quite familiar with the emotion. It sneaks up on me when I least expect it. When I’m driving to meet some girls for dinner instead of staying home to put my boys to bed. When I’m washing dishes rather than playing Legos in the floor. When I can’t give them both attention at the exact same moment and one of them walks away with hurt feelings. When I occasionally want some time by myself.

I know that full-time working moms experience significant mom guilt. I know this because I worked full-time out of the home until my oldest was three and a half. After picking him up from daycare, rushing home, cooking dinner, bathing him, and putting him to bed, I would sit down at night and lament all the moments I had missed from his day.

I thought the mom guilt would subside once I started working part-time out of the home and part-time from home, but it has not. I wake up really early in the morning to work and sometimes my early birds get up before I can finish whatever I’m working on. If I have to turn on a show just so I can finish up something, I feel terribly guilty. I really just want to sit on the couch and snuggle.

Sometimes I just can’t get all of my work completed amidst the chaos at home, so I leave the boys with my husband or my mom to go and work at a coffee shop. I feel guilty if I stay a little longer than I thought I would. I feel stressed a lot of the time because the next thing is always due, in regard to work. I never quite feel caught up. I feel guilty when I snap at the boys because of my own stress level and nothing they’ve done.

I often feel guilty when I have to give my toddler a lot of physical attention and my five-year old doesn’t get as much as I know he wants. It would be helpful to be an octopus sometimes.

I’m currently coming down with a significant case of mom guilt because my mother, my five-year old, and I are flying out this Sunday to visit my sister, brother-in-law, and niece in DC for four days. I am so sad about leaving my two-year old. He’s my little buddy, and I feel like he won’t understand where we are.

With my oldest child being five and my niece being eight, we have a number of ‘big kid’ activities planned. With airport shenanigans, Metro rides, long walks, a late night at a Major League ballgame, etc., we decided to let our toddler stay home with Daddy and my mother-in-law. He will be more than okay, but I still just feel so sad and guilty about leaving him.

I’m excited on one level because my older child deserves some one-on-one attention for a little while. He’s so good about allowing me to give most of my energy to the toddler, but I can tell he would love it if I could give him more individual attention. I also very rarely get to see my sister and her family. She and I are extraordinarily close, so I am excited about spending time with her.

These are the things I need to focus on, but it’s still hard thinking about leaving my littlest boy and his sweet face.

I never knew how much I could love something until I had my two boys. Having children makes every single thing in life more fulfilling and more memorable. But it also makes the challenging moments more intense. I wish I could tell all moms not to feel guilty, but that’s impossible. It’s part of who we are, part of what we do.

Next year my little one will be three, and he’ll be joining us on our annual summer trip to DC. This situation in particular may not happen again, but I know other things will bring about feelings of mom guilt. So instead of letting it get me down, I will try to embrace it and realize that to experience the highs of parenting, there will also be feelings of guilt and inadequacy.

Motherhood is so complicated. But I wouldn’t trade it for anything.