I’m back for the weekly SOC link-up with Jaime at Love, Jaime. Folks can link-up and free write for 5-7 minutes, so here goes.

I don’t know if I would love living in any ol’ small town, but I love living in my small town. We’re one of those small towns that’s featured in regional, state, and national magazines for our artists, potters, organic/farm-to-table restaurants, theater, micro brews, locally-roasted coffee, scenery, and outdoor excursions. Yet, we’ve still got the Mayberry thing going on where anytime I step into the local bakery or post office, it takes twenty minutes longer than it should because there are so many familiar faces.

Last night, our town had a Main St. Mile run. The race started on one end of Main St. and ran straight through town, ending at the historic courthouse. There were several different heats. The first one was the 0-11 age group and the family run. After that, there was a women’s run, then a 12-18 run, and finally, the men’s run.

I was doing an amazing job running from January to June, then I’m not sure what happened, but I stopped. Actually, I think I do know. One, I started cycling at the gym because I could read while riding the stationary bike and frankly, it was so relaxing, I became addicted to it. Secondly, my running shoes wore out in June and I lolly-gagged at getting a new pair. I finally got a pair yesterday, so maybe I’ll get back to running here soon.

We ran last night’s race with some friends of ours. The dads ran along with the toddlers in a jogging stroller while the moms ran with our five-year olds. My five-year old, Brooks, is very particular about his likes and dislikes. At this moment in time, he doesn’t like soccer or t-ball or basketball, but he absolutely loves to run. So when the man at the starting line yelled, “Go!” my child shot out of a cannon and ran so fast I had to sprint to find him in the massive crowd. It was quite frightening, actually.

Because I haven’t been running, I started freaking out that I was going to collapse from exhaustion merely trying to catch up to my five-year old. I finally found him, and from then on, we ran holding hands. It was awesome. I think our time was 9:30. Not great for a woman running on her own, but pretty awesome for a woman and a child running hand-in-hand. I was so proud of him.

It was a fun night. Maybe next year I’ll be back in running shape and will run the women’s race or maybe I’ll have a little boy on each side since my toddler will probably want to run next year. Either way will be fine with me. 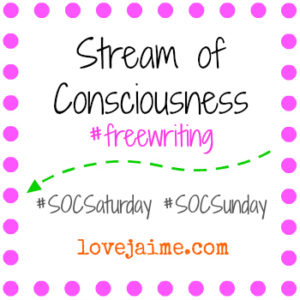