Time out started working when Brooks turned 2 and stopped working when he turned 3 1/2 , so for this short time, the phrase, “If you do that one more time, you are going to time out,” worked swimmingly.

When he started walking to the time out stool himself, however, and nonchalantly humming until the three minutes lapsed, we knew it was time for a new plan. He wasn’t misbehaving on a grand scale, but small acts of defiance were occurring, such as leaving the dinner table and running around before hardly eating anything, refusing nap/quiet time, or not always sharing with his little brother.

We had never been spankers, and Brooks wasn’t super attached to any toys, so taking toys away didn’t work either. He likes a challenge and loves getting little surprises. We decided on a sticker chart. It’s working for a couple of reasons. First, he loathes losing a sticker; he wants his chart to be completely filled. Second, when he achieves enough stickers for the week, he either chooses a toy that costs less than $5 or he decides on a family activity for the weekend. He loves the old school machines in the grocery store with the toys in the plastic round containers, so his reward typically only ends up costing 50 cents.

We choose behaviors that are specific to him, and they sometimes change weekly. We always include some behaviors for which he will always earn his stickers. Likewise, we’ve included some behaviors (i.e. Be nice to Baby) every week because well, frankly, we need him to be nice to Baby, even if we have to bribe him with stickers and toys. 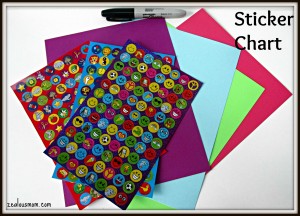 Deciding on Behaviors: You can choose which behaviors will be the focus for each week. Our focus behaviors change weekly depending on what we’re doing that week and what Brooks struggled with the week prior. Always include a couple of behaviors that you know your child will be able to accomplish every day. This increases motivation and confidence. Here is a link to the template I created for Brooks: Blank Sticker Chart Template 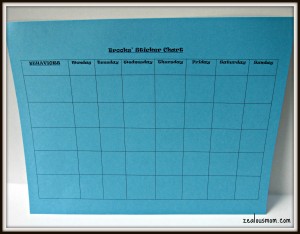 Completed Sicker Chart: As you can see, on Monday, Brooks did something to his little brother that made him lose his “Nice to Baby” sticker. Other than that, he had a great week. Once he lost a sticker on the first day, he worked really hard not to lose another. He doesn’t like the big mark through the box. 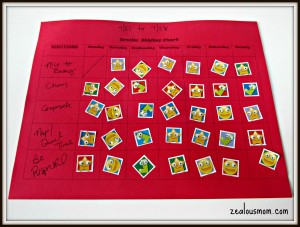 Rewards: Come up with a reward system that works for you and your family. It may be inexpensive toys, family activities, an extra book at bedtime, or a very small allowance. The goal is for the reward to be enticing so that your child will work toward it. Also, Brooks can only lose two stickers before he loses his prize. We started out with three then went to two once he learned the routine. Lastly, we post Brooks’ sticker chart up in his room throughout the week so it can be a visual reminder.

I know this won’t work for every child, but it’s a positive system and anything’s worth a shot, right? Good luck!