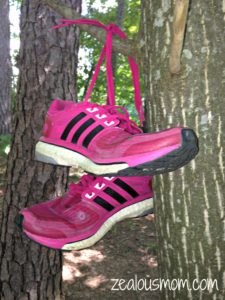 Sometimes something as seemingly insignificant as a pair of shoes can symbolize so much to a person. In May of 2013, I bought these pink running shoes with the intention of getting in shape and making a change in the way I took care of my body. I think I used them once in a three-month period because shortly after their purchase, my year took a downward turn.

My sweet mom began a battle with cancer, a friend and colleague of mine died in the midst of childbirth, and I went through a bout of eight ear infections in six months because of a severe and unknown allergy to dust mites.  I’ve watched friends and family members experience heartbreaks and sadness. My husband and I were both working nonstop, yet the family budget was tight and our attitudes weren’t much different.

I was irritated and anxious. I should have been running and working out more to battle the bad moods, but these shoes just sat in my closet.

In December, right before the Christmas holidays, I decided it was time, and we joined a gym. I pulled out these shoes and wore them to a boot camp interval class. I was in such pitiful shape that my body was sore for four days afterward. But I got back in there the next week and took another class by the same amazing teacher. One class turned into two which turned in to weeks of classes which have turned into almost a year of classes.

Shortly after joining the gym, I started running as well. In February of 2014, I ran my first ever 5K. I’ve run at least five races since with several more coming up on the calendar.

I’ve worn these shoes while running on the streets of Washington, DC, the beaches of South Carolina, the pavement around Lake Junaluska, on a number of treadmills, around my neighborhood, and throughout the region on race routes.

These shoes got me back out there. I hadn’t owned a pair of sneakers in at least 8 years. In these shoes, I became strong again emotionally and physically.

In the short time these shoes have been in my life, I’ve learned several lessons.

I’ve learned that a mother who exudes youth can be knocked down by the evil that is cancer.

I’ve also learned what grace truly means as I watched her fight it.

I’ve also learned that marriage is a beautiful, precious thing

I’ve learned that life can be fleeting and unfair and confusing.

I’ve also learned that life can be surprising and enchanting and inspiring.

I’ve learned that my two little boys are growing up entirely too fast.

I’ve also learned that nothing compares to watching them practice the lessons we’ve worked hard to teach.

I’ve also learned that dreams can come true, even if not in the exact way envisioned.

Throughout all these lessons, I put on these shoes, and I pushed my body to the limit. I ran further than I’ve ever ran in my life. I have visited the gym diligently without excuses. During those runs and those workouts, my mind has raced, thought, processed, and reflected.

Good-bye, pink running shoes. It’s been a trying year, but it’s also been a transforming one, and I’m thankful for that. I now know like never before to live fully and love deeply, and that light inevitably tends to follow darkness.