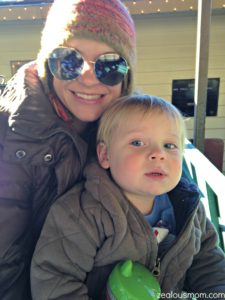 This is a picture before my sweet angel child pitched the biggest, most horrendous fit anyone at Dollywood has ever witnessed. And before the child’s mother (me) cried out of frustration in front of entirely too many happy tourists.

For months, we had been so excited about taking the boys to Dollywood to see the Christmas lights, visit Santa’s Workshop, catch a show, and just all in all, have a wonderfully festive time.

Last year, the temperature hovered around 50, my mom joined us, and Case was merely a baby and slept in the stroller for a good portion of the trip. We stayed for the parade and light show. It was simply magical. We wanted to recreate those feelings this year. Well, you know what typically happens when you try to recreate a moment in your life. It’s virtually impossible. That’s what made the original moment so special to begin with.

On the day we went, the high was literally 38 degrees, and the only nap Case had was a relatively short one in the car. Our four-year old, Brooks, did get to ride most of the rides he wanted, and both boys enjoyed Santa’s workshop tremendously. They visited with Santa, made an ornament, and hung out in the warmth of the decorative workshop surrounded by elves and lights. We then headed over to a section of the park where they have carnival games. This is where it all turned south.

Case wanted a little basketball so badly, but to get one, my husband or I had to make two baskets. Even if either one of us was a skilled basketball player, which we are not, our hands were completely numb from the cold. We decided to try anyway. We payed the man $5 for 3 shots. The hubs shot two, and I shot one. No baskets. We said, “Sorry, sweetie, we didn’t win one.” As all parents know, toddlers aren’t quite cognitively aware enough to understand reasoning. He looked at us like we were completely insane. The lip poked out, the tears started, and he screamed, “Basketball!” as loud as he possibly could. Making a very terrible decision, we decided to try again. This time, Todd made one shot. One shot got you a ball but not a little basketball. We thought he would be fine with that. Oh,  no. We handed him the ball, and he literally threw it clear across the lot.

For the next 45 minutes (no exaggeration here), he screamed and kicked and wailed and lashed about. He was so mad. I’m sure he forgot what exactly he was mad about after 5 minutes, but he was on a roll at that point. We headed toward the exit, and that’s when the sympathetic looks began. With their eyes, people were saying, “Poor dears”, and “I remember those days”, and “Please get that annoying child out of here”.

To leave the park, one must go through the gift shop, which is a very large building. Our child’s shrieks were echoing off the high ceiling. My husband decided to take him to the car, so I could focus on our four-year old and get him a little souvenir. We attempted to put the toddler in the stroller, but he wiggled and screamed so hard, he fell into the floor. My husband picked him up and walked a very long way to our car.

At first, I think I was laughing because the entire scene was so embarrassing and absurd, but then my laughter turned to tears. There I am, hunched down in the gift shop, bawling my eyes out with my four-year old patting my back. Then he says, “I heard there’s a parade at 8:00.” That made me cry harder because I knew there was no way possible we would be staying for a parade.

The Dollywood staff came over and offered me water and a tissue. Finally, I calmed down, and Brooks and I made our way to the car. The babe was still crying, but when he finally calmed down, I turned to look at  him, and he gave me the biggest, sweetest smile. Like nothing had even happened.

It is SO hard being a parent sometimes, but it always ends up being worth it. Even now, when I think back to last Thursday, I chuckle a little at what we all must have looked like. The beautiful truth is that no matter how challenging or exhausting it sometimes is, it’s still the most wonderful and precious job in the world.

A blogger friend who blogs at Really, Are You Serious? writes a post each Monday titled Mommy and Me where bloggers focus on the special moments between us moms and our little ones. Stay tuned for more editions!