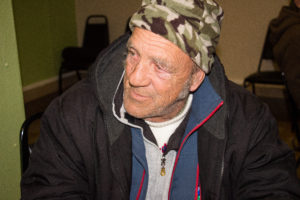 I love people. I love meeting them, talking to them, understanding them and learning their stories. It seems like a lot of folks may not have had a happy beginning or a happy current situation or a happy ending, but most people have felt happiness at some point in their lives. That’s always the moment that I like best, the part in the conversation when a memory or the mention of a person finally makes them smile.

I’ve been working with the Haywood Pathways Center over the last four months, helping raise awareness and funds. I’ve written newspaper articles, blogged about it, served as a live social media correspondent the day Ty Pennington came and am currently on a crowd funding team with two very dear friends and colleagues of mine. The Haywood Pathways Center has three components, a  homeless shelter, a soup kitchen and a halfway house.

The homeless shelter opened in November, and the soup kitchen opened last week. The halfway house has not opened on this site yet, but educational services are being provided to the guests of the homeless shelter. As part of the media and crowd funding campaign, the three of us on the media team spent an evening last week with the folks at the soup kitchen, talking and learning about them. 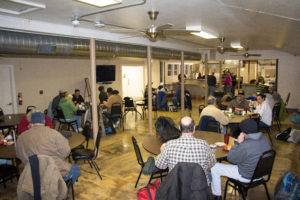 I was asked to do a video interview with one of the guests. There was something about Kenneth, age 68, that drew me to him. He’s the gentleman in the first picture. As soon as I sat down with him, he smiled with his whole face. My kind of person.

We talked about the formal stuff first. “How are you liking the homeless shelter?” “How are the meals?” “What types of foods have they served?” “Are you comfortable?” I learned that before the homeless shelter opened, he stayed at a different house almost every night, and many of the houses involved drinking which he is trying to get away from.

As we continued talking, I wanted to really learn about him. So I started asking questions about his life. This is when his eyes sparkled. I learned that he was born and raised in Haywood County. He attended Canton Junior High (the building which is now Canton Middle School where my husband is principal).  I didn’t tell him that because I didn’t want him to feel unequal to me in any way. He quit high school but obtained a GED. Throughout his life, he’s been an electrician and a plumber. He’s also performed a number of other handy-man jobs such as drywall and building. I asked him why my sink is making a WHOOSH-WHOOSH-WHOOSH sound every time we run the water. He laughed and said we had air in the pipe. Then he told me how to fix it. When thinking about his life, he said he often found comfort in the bottle, and he admits to making mistakes, but he says that’s behind him now. He’s doing some handy work for the bigger soup kitchen in town and wants to find more work.

I loved talking to Kenneth. And I hope for ten minutes, I helped him feel like a fellow human instead of a homeless person. I hope I reminded him of times in his life when he felt happy and needed and confident. 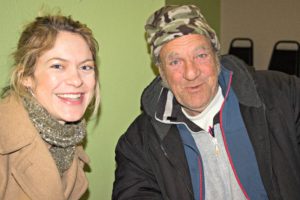 This is why I love working on this campaign and being aware of all that Haywood Pathways Center is doing. It’s truly helping individuals change their lives and find a new path. We titled the crowd funding campaign #FeedTheNeed because a lot of the money will go toward feeding the guests of the homeless shelter. Eventually, they want the guests to cook their own breakfast and clean up. Bag lunches are offered so that guests can leave the site to work, and a warm dinner is provided each evening. 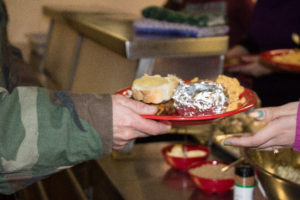 I see so much potential for the Haywood Pathways Center, and I love how our community has embraced the cause. Like I said, I love people. Everyone has a story. The job of those of us more fortunate is to help remind them when that story was happy and good and to try and get them back to that place.

If you want to support #FeedTheNeed, all donations are welcomed and tax deductible. We’ve had folks donate $5 and others donate $1,000. Everything is appreciated! More money is needed to truly create the campus that was envisioned. To donate click below. Thank you! 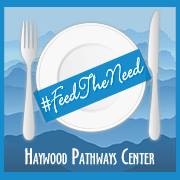