Late Tuesday night I received an email from the folks at USA Today asking if I could do a phone interview with Patrick Foster and Jim Lenahan early yesterday morning. I typed these exact words in response:

Jim and Patrick are the guys of Dad Rock, a weekly USA Today podcast where two middle-aged music lovers pontificate about music, interview guests and crack jokes. After a year on the podcast, they have quite a following. 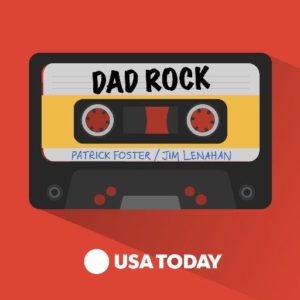 A couple of days ago, they loaded up a restored 1964 vintage Airstream trailer dubbed ‘Lucy’ and headed down the open highway for the musical adventure of a lifetime. The ultimate destination for Patrick and Jim is the famed South by Southwest (SXSW) music festival in Austin, TX.

Tuesday morning. Getting ready to set out on #DadRockRoadTrip. pic.twitter.com/Gb66bq9dUp

Joining the Dad Rock duo are USA Today reporter Mike Snider and videographer Steve Elfers. En route to the festival, Patrick and Jim are stopping in four musical cities. And guess what was stop #1 on their itinerary?

Yep, that’s right! Of all the music cities out there, the crew of Dad Rock included Asheville in their top five. Pretty special, huh? The complete tour includes Asheville, Nashville, Memphis, Dallas and finally, Austin.

While in Asheville, Dad Rock stayed in a Swannanoa RV park and did some pretty unique stuff. The guys spent the day with Emily Patrick, entertainment reporter for the Asheville Citizen-Times. They first visited with Dan Williams in the Grove Arcade and learned about handcrafted dulcimers. Then they hung out with local comedian/musician Tom Peters at Asheville FM radio station (103.3), a low-powered, grassroots, volunteer-based radio station in West Asheville.

Patrick of @DadRockShow says “I would give anything to have a low power radio show” after visit to @AshevilleFMpic.twitter.com/nDJ1Aw5Rxq

They finished their day at The Grey Eagle watching Luther Dickinson, lead guitarist and vocalist for  the North Mississippi Allstars.

Hanging w/@LutherDickinson at The Grey Eagle in #asheville. “Play every note like it’s your last,” his dad told him pic.twitter.com/OH0VibbTwE

Yesterday, Dad Rock interviewed local band River Whyless before leaving for Nashville. When I talked to the guys, they both said their time in Asheville wasn’t nearly long enough. Pretty but antiquated Lucy the Airstream could only go so fast causing the Dad Rock crew to arrive in North Carolina later than expected. It was Patrick’s second trip to Asheville and Jim’s first and just when they started feeling the vibe, they had to head out.

“We really wish we could spend more time here,” said Jim. “This town has so much character, truly a place that breathes traditional music.”

Jim is a vegetarian and was highly impressed with the number of vegetarian options around Asheville. They ate dinner at The Grey Eagle before the show, but I told him he needed to return and try out the Laughing Seed or Rosetta’s Kitchen or another super delicious restaurant that specializes in vegetarian fare. Patrick is dad to three girls and Jim has a son and a daughter, so I also said they should bring their families because Asheville has something for everyone of every age.

We wish them the best in their travels and look forward to hearing all about it on their show. Keep up with them on Twitter and Facebook. You can find archived and current podcasts on their website.

It’s always fun to meet people who trulyloveandknow music. I could hear the excitement and energy in their voice, and it was apparent that they adored Asheville. Jim and Patrick, safe travels and we hope to see you in our town again!