I’m a pretty easy-going person, but I’m about over everything regarding this election. I’m sure I’m going to irritate folks on both sides with this post, but since everyone is touting their right to free speech, I’ve decided to use mine as well.

To begin with, I’m frustrated with my comrades who, like me, voted for Hillary but are now acting the fool. Over the past year and a half, I thought I was on a team with intellectual, open-minded, compassionate, critical thinking individuals. And now every time I turn on the TV or hop on Twitter, these same people are marching around yelling obscenities or screaming at Trump Tower. As a friend of mine said, “He’s not even up there, people!”

Then yesterday when I got online, I started reading all this about symbolic safety pins, wearing a safety pin, and using #safetypins on social media. Seriously? I have some better ways of letting others know you’re compassionate and that you’re a “safe place.” Some of these include:

Being curious, not judgemental.

That’s it. When you do these things, you somehow ooze the ora of “safe place” without having to wear a safety pin. It’s super amazing how that works. It’s called solid human character.

I’m also frustrated with the #Godfactor movement. Franklin Graham is all over the Internet pronouncing, “God’s hand intervened Tuesday night to stop the godless, atheistic progressive agenda from taking control.” When I read that, I felt very protective over my God who must be different from Franklin’s.

My God is righteous, loving, accepting, and forgiving. My God would never perform an act with the purpose of saying, “Ha, ha! I got you, you crazy liberals.” Further, I’m not totally convinced my God would approve of Donald Trump. My God was the one who encouraged his followers to serve others, dishonor materialistic treasures, and save the least, the lost, and the lowest. Did I miss something? Because I haven’t heard any stories of president-elect Trump living along these lines, but I’m always hopeful everyone can find the God I’ve found, so you never know.

So despite the admiration I have for Billy and Ruth Graham, I’m starting to lose whatever appreciation I had for Franklin. Some of the most respected pastors and theologians I know would never jump on social media and seek fame or status with a triviality such as a hashtag. In fact, the ones I know have encouraged others to have hope, faith, and trust, and to continue loving others through deed and word, no matter the election results.

I’ve heard several people say they feel like they’re mourning after the election, like someone has died. Well, after spending three months grieving the passing of my mother, I know what true, intimate grief feels like and it doesn’t stem from election results. It’s much worse, raw, and final. With that being said, I know people are truly saddened by this election, and I don’t want to belittle those feelings. I guess the main difference is a presidential term is only four years, while actual death is for eternity.

Further, isn’t victory sweeter when the loser ultimately attains triumph over the victor? So why start yelling and screaming now? Let’s just wait and see for a little while…isn’t life more interesting that way? And goodness gracious, what if it isn’t as catastrophic as we all think it will be. Then what?

I don’t believe for a minute that Donald Trump is going to do half of what he said. He may attempt to tighten immigration laws, but I don’t believe he’ll succeed in building a wall. He may say he’s going to deport immigrants, but this is going to be very challenging considering how many immigrants hold thousands of jobs and put money back into our economy.

I don’t even think he truly believes women are beneath men. I once watched The Apprentice faithfully, and I could tell how impressed Trump was with women who were driven, innovative, and progressive. So let’s just see how cocky he gets when a woman like this bucks up against him.

I whole-heartedly believe Trump just talked a lot of junk to get elected, but I don’t fully believe anything he said will fully transpire. Do you realize how hard it is to get a law passed or one overturned? It has to go through the House and the Senate, and there are a number of Republicans in these roles who are more Reagan-esque than Trumpy, not to even mention the Democrats that serve. So Trump yelling a bunch of promises during the Election doesn’t mean they will ever happen.

So what can we do? Not sit behind our devices and use hashtags. Not run around yelling anti-Trump sentiments. Not convince our children to hate the next president. You’ll find fewer people as open to diversity and loving of people’s differences than me, but there are better ways to show it. Believe me. Wearing a safety pin is not a sustainable way for struggling adolescents and adults to identify their “village.”

We can be loving, compassionate people who continue to fight for what’s right and what’s good. We can vote in any and every election that comes our way. We can be smart, driven, and speak our minds in an articulate way via the appropriate forums. If you’re a writer or a blogger, use your platform to promote love, acceptance, kindness, and tolerance. Don’t use it to spread hate, slander, and hopelessness. If you’re a woman, instead of yelling at Trump, be a woman he couldn’t stand up against. Be smart, driven, successful, savvy, witty.

The rest of the world is already mocking us because we elected a millionaire celebrity with no military or political experience as our next president. And it’s been said the election was not rigged in any way and despite the fact that Hillary won the popular vote, Trump won the title of president in the same way that Kennedy won, that Bush won, that Obama won. It is what it is, friends.

What we can do is not make ourselves look even more globally ridiculous by wearing safety pins or promoting some malevolent, vengeful God. As Gandhi said, get out in the world and be the change you want to see. Get off your phones and computers wasting time being mean, ignorant, and hateful. Get out of your house and embrace community, help the poor, empower youth, play with your children, educate yourself, speak your mind eloquently, enjoy nature, connect with a loving God, open your eyes, open your heart.

Please, for the love of our country, respect for yourself, and the memories forming in our children’s minds, stop hiding behind a hashtag. Be the change you want to see. Stop talking about the change and… 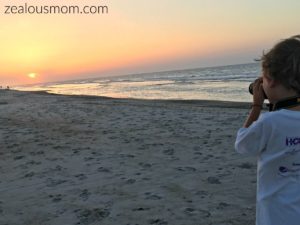