5 Thoughts from the Week

1. My husband has been out of town this week at a conference, so I’ve been parenting alone for the most part. My sweet mom came over and spent the night with us. The boys love having sleepovers with Grandma B. The afternoons were challenging as I had a number of things going on this week, so thank God for grandmas. Further, I am in awe of single parents.

2. It’s really cute when your kiddos wear your boots around the house, but oh how quickly cuteness can go awry. Yesterday morning, Brooks put on my rain boots 2 seconds before I was to put them on. I set him on the bed to pull them off, but instead of the boots, he went flying into the floor. Apparently, he had put his feet in my boots WITH his own shoes on. It took my mom and I 20 minutes to pull them off. I almost had to cut my favorite rain boots off his legs. We were even late to school and work because of it. It’s one of those things that was more than stressful at the time, but already funny in retrospect.

3. I’ve got my half marathon coming up in less than 2 months, and I’ve never ran more than six miles, so it’s my goal over the next couple of weeks to slowly move up from 6 to 13.1. I have been running a lot this week, but it’s hard to find the time in the day to run 13.1 miles. Does anyone else have that problem?

4. I’ve been very emotional this week as you probably noticed in my Wednesday post, but I’m feeling better today. Nothing catastrophic has happened, just the regular internal, hormonal emotions that come with being a woman and a mom. I’m hoping the weather is nice this weekend. The sun is my very dear friend.

5. I’ve had a cracked molar for six months and haven’t gotten it fixed, yet I’ve spent $100 twice over that time to fix a cracked screen on my iPhone. Serious stupidity. My tooth has been hurting badly this week, so I finally made a dental appointment. I go Monday.

5 Photos from the Week 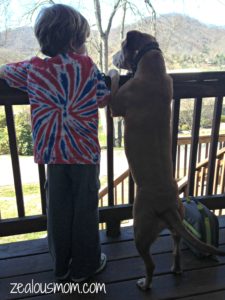 This sweet boy loves his dogs. Not sure what they’re talking about, but it looks serious. 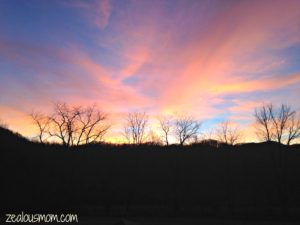 I love living in the mountains of North Carolina. 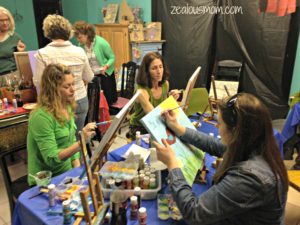 Painting with my women’s group. I painted my mom something special. This night was extraordinarily fun and therapeutic. 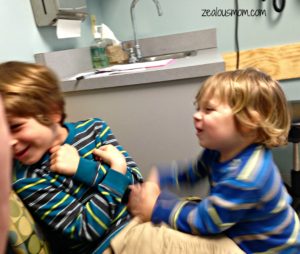 Finally had annual check-ups yesterday (2 months late because of weather). Case had to skip his nap, so he was WILD while waiting on the doctor. We survived. 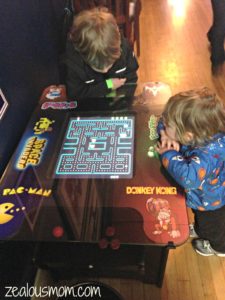 A new brewery/restaurant in town has an ol’ school 1980s video machine with Pac-Man, Donkey Kong, etc. I taught the boys how to play Pac-Man last night. Seriously nostalgic and fun.