Every now and then I like to look at myself in the mirror and say, “What are you into these days?”

If the boys aren’t in the car, I like to drive in silence so I can hear my thoughts. Yesterday as I was cruising down the road, I realized I’m into quite a few new things these days. I’ve always been a fan of taking on new adventures and experiences, both big and small, and it seems the past few months have been full of them. So here goes.

For the first time ever, I created a monthly meal plan for the month of March. In the past, I’ve created weekly meal plans, but they never worked. Last weekend, I sat down with a Microsoft Publisher calendar and wrote in days that either my husband or I or the family would be out to dinner, at a meeting, etc. Then on the other days I wrote in meals. I then made a grocery list for the first two weeks. We put the meal plan on the fridge. This was the first week, and we didn’t eat out one time nor did I have to make a quick trip to the grocery store. And my husband says he likes being able to look at the menu to know what’s happening each night. So far I’m loving it. 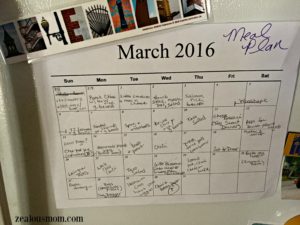 I’m slightly obsessed with Bullet Journaling. If you’ve never heard of it, it’s a planning/organizing system that allows a person to be completely individualized and creative. I’ve written about it lately on the blog, and based on the traffic to these posts, there is a huge community of bullet journalists, and they system is catching on like wildfire. I’ve never been a fan of traditional planners/calendars/agenda books. The Bullet Journal allows me to make it all mine and really tailor it to my needs and life. 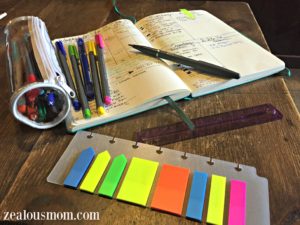 I’ve been taking Piyo classes at my gym for about two months now, and I am loving it. Piyo is a combination of Pilates and yoga. I’m sore every time I take it so it’s obviously working me out well. I love feeling like I’ve worked out but also feeling stretched and relaxed. I’ve decided it will always be a part of my weekly workout regimen. My teacher rocks and there’s a great group of women who consistently take the class with me. So many good things at once. I love it.

Rumi is a 13th century Persian poet and Sufi mystic, but his poems and quotes have resonated throughout the centuries. Lately, I’ve really turned to them for inspiration and meditation. Very powerful. 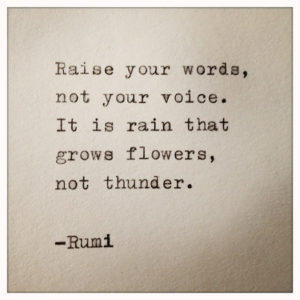 I’ve been writing columns, newspaper articles and blogs for five years, but I’ve only recently delved into magazine writing. I wrote for the most recent issue of Discover magazine published by Lake Junaluska, and I have a couple of articles coming out this spring, one in Plough to Pantry and another in Smoky Mountain Living. I enjoy all genres of writing, but I really like the lyrical style of magazine writing. It allows me to write with more emotion than newspaper writing.

My sister, mom and I have been group texting non-stop trying to figure out plans for several upcoming trips. My family is driving up to DC for spring break like we do every year. So fun! Then in June, we’re flying up for my sweet little niece’s first birthday and Christening. Also, I’m flying to California in April for Mom 2.0 (a blogging/media conference), so I’m a bit overwhelmed trying to figure out all of these plans among everything else going on in my life, but I’m also super excited.

I’m on two race committees, and I must admit it’s a bit overwhelming. The PTA at the school where I work part-time is hosting a two mile race at the end of this month and the PTA at my child’s school is hosting a 5K in April. They are both going to be a lot of fun, and I’m really excited, but keeping everything straight in my head has been like a cerebral exercise for sure. If you’re local to Western North Carolina, we would love to have you at both races.

I’ve been so busy that I don’t think I’m eating enough calories during the day, so I’ve been eating really well at dinner and then when 9:00 pm rolls around, I’m starving so I grab a bowl of cereal. I’ll admit that last week I was eating the new Batman Strawberry Chocolate crunch because I’d recently posted about it on my blog and it was here in the house, but my go to cereal is Nature’s Path Peanut Butter Panda Puffs with almond milk.

Working on my marriage

It’s so easy to put a marriage on the back burner when kids, work, stress and other seemingly important things appear more prevalent. Lately, both Todd and I have been working hard to strengthen our unit because at the end of the day, the marriage is the nucleus of the family. Last week I wrote a real and honest (albeit kind of comical) column in the newspaper about what it’s really like to be married. It felt so good to write. We’re headed out today for a weekend marriage retreat, our first one ever. The senior pastor at our Methodist church is just the absolute best, and he recommended it to us. We’re really excited about. I’m planning to unplug this weekend, and really soak it up. I’ll let you know early next week how it goes. 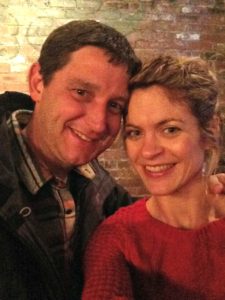 Now what about you? What are you into these days?