Yesterday began like every other day. That’s the funny thing about life. We wake up. We start our routine. We head out to work and school, but we really have no idea what will come of the day.

My husband had already left. The boys and I hustled to get out the door. We’ve been running late these days, so I made an effort to get out of the house 10 minutes earlier than usual. We sang Christmas carols on the way to school. The boys ate snacks in the car. I drank my coffee.

I dropped off our kindergartner at his elementary school, kissing him on the head before he walked in the door, faithful I would see him in the car line at 3:00pm. I passed my good friend in her car as I pulled out and she pulled in. We both smiled and waved.

My two-year old and I headed down the road toward his preschool. We listened to Chipmunks Christmas and Rudolph the Red Nosed Reindeer. We headed into downtown Waynesville.

So far. The morning was a mirror image of every other morning. So far.

As we neared his school, I changed the song to Santa Claus is Coming to Town by Jackson Five. He and I were both singing. We were 1/4 a mile from his school.

This is when the morning changed.

Out of the corner of my eye, I saw a lady edge pass a stop sign and literally in an instant, my boy and I went from singing to spinning and flipping.

As I lay upside down in the car, strapped in my seat belt, Michael Jackson continued to belt out his lyrics.

Then after what felt like an eternity, I heard a little voice behind me say, “Mama?”

Mommy Bear then kicked in. I had to perform acts of yoga to wriggle out of my seat belt and crawl through orange juice and coffee to get to him. He was hanging upside down in his car seat, eyes wide, but no tears.

“I never want to do that again,” he said.

It didn’t make sense to crawl back to the front door that had burst open on impact, so he and I climbed out the back windshield which had shattered. He crawled into the arms of a complete stranger. I was so thankful at that moment that she was standing there. I crawled out after him and took him back in my arms.

The first thing I did was look for the lady in the other vehicle. She was standing near her minivan. She looked okay. She apologized with sincere sadness in her eyes. She had a child in her car as well.

Sirens sounded instantly. I turned around, not sure what to do. And that’s when I saw a familiar face. A friend of ours stood there, having seen the accident after leaving a nearby coffee shop. He ran to me and asked if we were okay. He hugged us. I really needed that hug. Then he called to tell my husband because my hands were shaking too badly to call myself.

They shuttled us into an emergency vehicle to keep us warm and check for injuries. That’s when I saw the next familiar face. Case’s preschool director came running to the car. He and I were both happy to see her. When she put her arms around me, I let go. The tears came, but I held it together for Case. Children don’t like seeing their parents cry.

Then my husband arrived on scene, very relieved to see us in one piece.

From that point on, the day went by in a flurry. Emergency personnel, hospital, junkyard, insurance agent, soreness, questions from our five-year old. I’m so thankful for my husband who took care of all of the annoying, complicated stuff so I could continue processing what had happened and snuggle with the boys.

As the day went on and the accident sunk it, I kept looking at the pictures wondering how we walked away unscathed. The only answer is that it was a miracle. The impact was directly on Case’s car door, yet within the hour, he was giggling and asking to go to school.

Miracles do happen. I’m not sure why were saved yesterday, but I will forever be grateful. I will also be grateful for small towns where I can climb out of my broken car and immediately see two kind, familiar faces. I’m grateful for efficient emergency workers who were truly concerned about us and cheered up my scared boy with a teddy bear. I’m grateful to have been in a Subaru, a strong, well-made car that kept my boy and me safe from harm. I’m grateful for friends and family who called and texted the entire day to make sure we were okay and to ask if we needed anything.

Though I feel shaken, I feel so blessed.

Please think of and pray for the other lady in the accident. I’ve thought about her a lot.

The soreness will fade. The car will be forgotten, but the lessons learned from yesterday will forever be remembered. Never take anything for granted because it can all change in the blink of an eye. 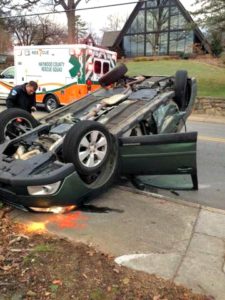 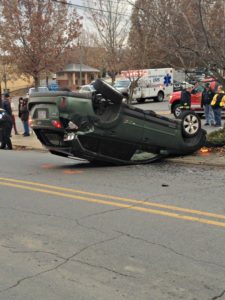 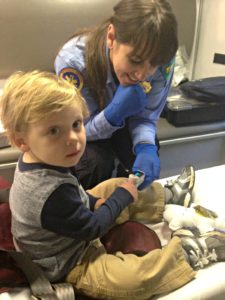 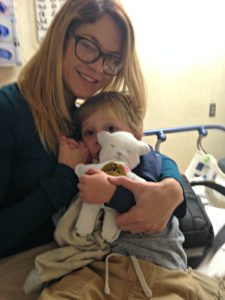