Has anyone else driven thirty minutes back home to get a lovey or blanky or bunky, or whatever other endearing name your child has given an attachment object? Well, we have…several times.

I tried repeatedly to give Brooks a paci when we were barely surviving his bouts of colic every night from 6-9. He responded by spitting out the thing and screaming even louder. I continued trying to force the paci when he was a bit older, and he cried for two hours straight with other family members in the car. That day is still talked about at Christmas dinner.

Since the paci was a no for him, we started with the blanket as it was his pediatrician’s advice that  some type of attachment object truly soothes children during times of sickness, transition, or frustration. He attached pretty quickly to the blanket. That should be the end of Brooks’s attachment object acquisition story, but it’s far from over.

Within the next year, he had attached to a quirky little stuffed water drop that my sister had given him. It was blue, so he aptly named it “Blue.” For about a year, we had to keep up with Blanky and Blue wherever we went. Within another year, he had grown fond of both a stuffed rabbit and a monkey. It was getting to the point of absurdity as every time we hit the road, the hubs or I would say to the other, “Did we get Blanky, Blue, Bunny, and Monkey?” At this point, I started calling them “Lovies” which collectively described the whole lot of attachment objects.

If you can believe it, since that time, he now has a stuffed snake bought for him by Grandma at Dollywood and a Pillow Pet Dream Lite penguin. My boy scout of a husband thought up an ingenious way to keep up with the multitude of lovies. He swaddles Blue, Monkey, and Bunny in Blanky then wraps the whole bundle in Snake. Sorry, Penguin, we couldn’t figure out a way to include you.

Along comes Baby Case. He, unlike his big brother, took to the pacifier immediately. Even when he was a tiny baby, the paci did a pretty good job of soothing him. After those horrendous first weeks, that is, when absolutely nothing seems to soothe.

For a while, Mommy and/or Daddy could be found crawling under the crib in the wee hours of the night looking for the paci or contorting our body and nearing an accident trying to retrieve it in the car. We finally got our brains back. We now have a basket on the dresser beside Case’s crib full of pacifiers and he never gets in the car without the connector strap (brilliant invention, by the way).

Now that he’s a bit older, he only gets it in the car or when he’s sleepy. I’m already dreading taking it away. Any advice regarding that front?

He’s also very attached to his blanky. He looks like a baby on a cartoon loudly sucking his paci while dragging his blanky all over the house. Most of the time he’s so dang cute, that Daddy nor I have the heart to jerk the paci out of his mouth. Again, any advice? 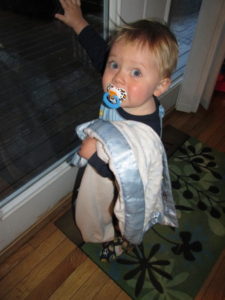 Here’s the thing. Brooks is already moving away from his lovies except at bedtime, and I know before we blink, Case will be doing the same thing. So, is it comical that our children’s lovies, blankies, and binkies take up half of our “To Pack” list when traveling? Yes. Do I care? No. What I do care about is making them happy and slowing down these sweet, childhood years as much as humanly possible.