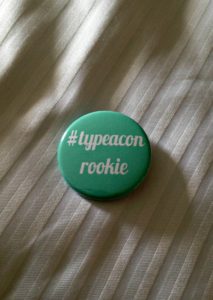 I attended the Type-A Parent Conference this past weekend. It was my first blogging conference, and boy, was I inspired.  Some of the attendees have been blogging since 2001! I could barely check my university email account back then much less design and manage a blog.

I’ve always been a writer. When I was about seven, I entered a book I’d written in a national children’s book contest. Needless to say, I didn’t win. I think someone who could actually drive or navigate the airport terminal stole the prize. In elementary school, I won a patriotic essay contest and had to read my paper in front of all of my peers. All through my life, I’ve kept collections of stories and poems that I’ve written. As a college student, I would even scribble poems on cocktail napkins for a free drink or dessert.

For some reason, that I still haven’t discovered, I did not major in creative writing or journalism in college. Instead, I opted for psychology and spent four years philosophizing the theories of Freud, Jung, Skinner and the like. Since memorizing the Freudian stages and analyzing the Jungian archetypes, I’ve worked in the fields of psychology and education, but writing has always been an enticing lure. I now know why smokers and drinkers have such a hard time quitting. Luckily for me, it’s the written word I’m addicted to.

When Brooks came into our lives in 2009, I began writing a journal for him which is now completely full. The first entry dates 7/2/08 and talks of seeing his tiny heart beat on the ultrasound machine. Blogging crossed my mind, but I never actually created a blog. In January of 2012, I began Case’s journal, but by May, his journal finally turned into this blog. I’ve been hooked ever since.

I’ve realized in the past four years that one is never too old to be a rookie. Three years ago, I went back to school to earn a Certificate of Journalism Studies and since then, I’ve written for several freelance clients and have now been blogging for over a year and a half. I was one of the “greenest” bloggers at the conference this past weekend, but instead of being intimidated, I was knocked off my feet by the talent, mentoring attitudes, and charisma of the bloggers I met.

Don’t get me wrong, it’s not easy being the new girl in a field where people have decades of experiences and networking, but ultimately, this is my life, my one stint here on earth, and I want to look back on it and be proud, to say that I was what I wanted to be.

You may be one of the lucky ones who works in a field or is in a season of your life where everything just feels right. You love it all. Well, kudos to you and be so very grateful. If you’re not, however, what’s stopping you? Go out there and find what makes you happy. You may have to work harder because you are older, but that only makes the end result so much sweeter.