Though it feels like a dark cloud is hanging over Earth right now, I was determined to find 10 things to smile about during the month of March, which I think we all can agree felt like a long and bewildering month. This list is much different than previous “10 Things” lists, which often include concerts, traveling, writing conferences and other experiences involving social gathering as opposed to social distancing. When 2020 started, I made a commitment to create one of these posts each month. Admittedly, the month of March 2020 will go down in history as one of the most grueling and stressful months for ever. Nonetheless, below are 10 things that have brought light to my life during this trying time. 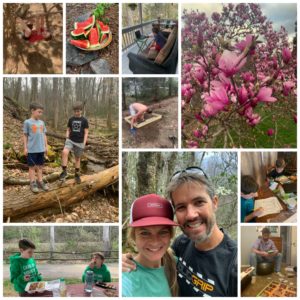 1). Marco Polo: Tons of folks are hopping on Zoom calls these days. Instead of that, I’ve been utilizing Marco Polo. Three friends and I started doing this in early March when we were starting to get the feeling things were about to get bad. Interestingly, the first few videos I made were from the weekend of March 7-8. In that one weekend, we’d attended multiple games of a SoCon basketball tournament, a concert in downtown Asheville and a book signing event at Barnes & Noble. By the next weekend, everything had shut down and school was closed. It’s crazy what can happen in one week when there’s a scary virus rampaging across the globe. The girls and I have been making Marco Polo videos every day during the COVID-19 crisis. It’s fun to keep up with one another. It offers some smiles, laughs and encouragement when we all need it.

2). Skip Bo & board games: Whether it’s Matthew and me playing cards with a glass of wine or all the adults and all the kids playing board games, we’ve had a lot of fun with these activities. I’ve always loved playing games. It just seems regular life doesn’t allow enough time for it. In the normal world, we’re  running around to sports activities, theatre practice and other extracurricular activities, which leaves very minimal time for relaxing and playing games or cards.

3). Cooking: This has probably been high on everyone’s list. With everything shut down, other than a few takeout restaurants, we’ve been cooking breakfast, lunch and dinner every single day. I’ve always enjoyed being in the kitchen so this isn’t something new for me. It’s been fun trying out new recipes over the past month. With that being said, I miss sitting down at some of our favorite restaurant and enjoying the vibe of a public eatery. As a social species, going out to eat feels like a way we can connect with people we don’t know. I’m very much looking forward to a time when we can all do that again.

4). Reading: I’ve been reading more than usual but still not enough. Work and having the boys at home has kept me extraordinarily busy. There is really no time to sit down for an extended period and read. However, here and there, I’ve picked up a good book and gotten lost in the words. When the boys have their reading time each day during “school,” I try to stop what I’m doing and sit down and read with them. Currently, I’m reading A Long Walk to Water by Linda Sue Park. It’s a middle grades novel based on a true story. If you have a 4-6 grader in your home, you should check it out.

5). Walks, hikes & the great outdoors: We’ve been frolicking a lot outdoors over the past month. When we’re not self isolating indoors, we’ve been trying to explore nature. At first, all the trailheads in our area were still open but as COVID-19 restrictions because more and more intense, they began to close. There are still a few places to hike, but everyone is being careful. With hikes limited, we’ve been taking walks within the neighborhood or exploring creeks and woods near our house. Anyway we can get outside has been very helpful for our spirits. I’m beyond grateful to live in the North Carolina mountains where the opportunities to connect with nature are abundant.

6). Jack Ryan & Ozark (not Tiger King): Who doesn’t like getting sucked into a good show? Further, there’s no better time to binge watch TV than when a person is in quarantine. Matthew and I zoomed through Jack Ryan on Amazon Prime. I’ve been a fan of John Krasinski since The Office. I wasn’t sure how he would do playing a CIA agent when his “Jim” character so engrained in my mind, but after about five minutes of the first episode, I no longer saw him as the pretty boy dork with a crush on his colleague Pam. Also, I know a lot of you are going to be shocked by me saying this, but we tried to watch Tiger King and just couldn’t get into it. I know! I know. We may try again but we decided to move on to the new season of Ozark. We loved the first two seasons and the third is just as addictive.

7). Schooling at home: I work for a newspaper so with the press considered “essential,” I’ve still been working some from the office. When not at the office, I’ve been working from home while also trying to manage the boys’ school work. Most days, our goal is to do intensive school from 10 a.m. to 1 p.m. We will read at other times, do a project or do something active, but we try and get their actual work accomplished during that focused time frame. I included this as something that makes me smile because honestly, the boys have been so good with completing their school work. I’m grateful for their teachers and so proud of my boys for working hard. They miss their teachers and friends badly, but I think they’ve accepted this as their short-term reality and are just trying to go with the flow.

8). Work: Like all small businesses, local and regional newspapers are struggling to stay afloat right now. Further, many of our additional publications are related to tourism or entertainment, two industries that are currently at a standstill. With everyone being on their phones or behind a computer screen, we’ve been doing a lot of digital advertising and online journalism over the past several weeks. It’s been all hands on deck to keep things moving. We’ve seen so much support and love from our community, and that means the world to us.

9). Gardening: We haven’t had a garden since we moved into our new house almost three years ago. My older son has always loved being outside and working in the yard. I’ve told him routinely that we will start a garden and this year we finally had time to do it. I was told that March is the time to plant lettuce because it seeds well in cool ground. Late March/early April is also a good time for annuals, so last weekend we planted both. Matthew even helped us build a box garden, so I’m hopeful our lettuce will be bountiful this year.

10). Slowing down: I think we can all agree that the COVID-19 era has forced us all to slow down. It’s only been about three weeks since we started self-isolation, but it feels like much longer than that. It feels like we’re all just sitting around waiting on something, what exactly we don’t really know. I guess we’re waiting on the case number to peak or for the curve to finally flatten. It’s a strange world right now, but I’m hopeful we’ll get to the other side of this sooner than later. In the meantime, the slowing down is allowing us to reset, recharge and reconnect. 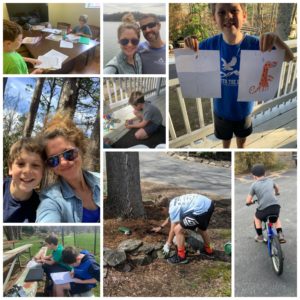